Remembering a fellow officer and a mate.

Remembering a fellow officer and a mate.

Posted on September 26, 2016 at 12:13 pm
bluefarewellguardhonourhumourlinespolicepridequeenslandthin 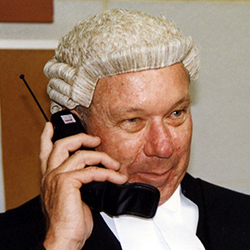 In September 1974 I was sworn in as a Police Officer at the Queensland Police Academy, Oxley. The swearing in ceremony involved three squads of successful recruits, one of whom was John Douglas “Jack” Farrell. On 31st August 2016, I was honoured to attend a funeral service for Jack Farrell in the chapel of Traditional Funerals at Burpengary in my capacity as a funeral assistant with Traditional Funerals.

The service was well attended by family and friends and a large number of Jack’s Police and Legal Profession colleagues. A touching eulogy was beautifully delivered by Jack’s daughter, Jen, who was blessed with a great sense of humour, no doubt courtesy of her dear Father.

At the conclusion of the chapel service a guard of honour was formed by the police contingent under the command of Deputy Commissioner Brett Pointing. Pall bearers carried the coffin from the chapel to a hearse at the front of the chapel and I had the honour of driving the hearse through the guard of honour. As the hearse, led by Jack’s family, moved along the driveway through “the thin blue lines” I felt a trembling sensation and was overcome by an immense feeling of pride to be part of such a magnificent tribute to an old mate.

Special thanks to committee and members of the Metropolitan North and Sunshine Coast Retired Police Associations and Inspector Lee Jefferies for their assistance in organising this special farewell.

Job satisfaction doesn’t come any better than occasions such as this – rest in peace Jack and thanks for the memories old mate, you will never be forgotten.