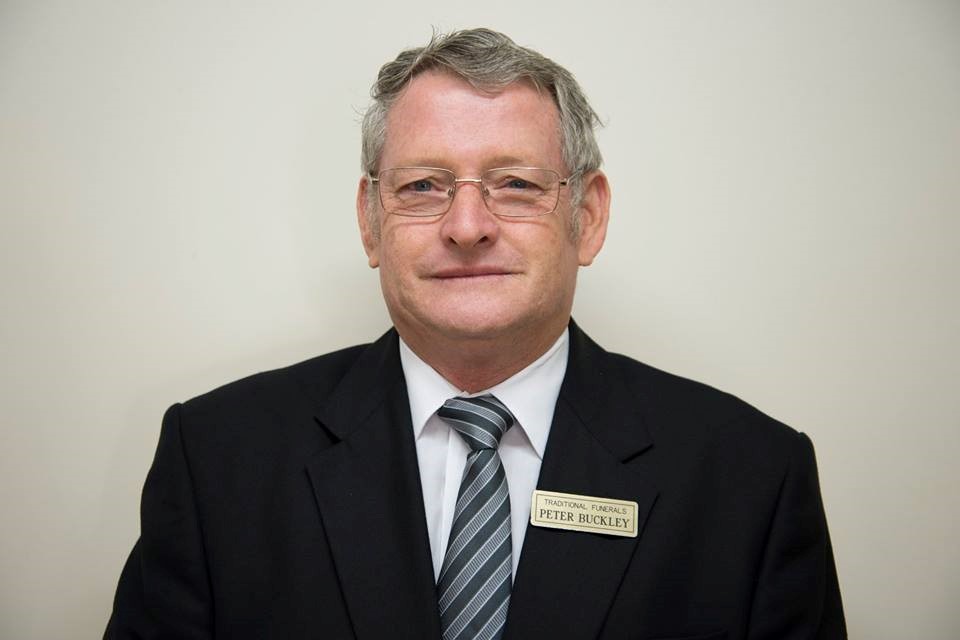 We are proud to announce Peter Buckley as our Longest Serving Member of staff. Well done Pete – thanks for all your service so far. Here is his story!

“As the longest serving member of the staff of Traditional Funerals at Burpengary, I have been privileged to be part of the growth of the company. My journey started in June 2001, when I was making inquiries at the office of Traditional Funerals in relation to funeral services for my family. I was speaking with one of the company directors, Mr Bruce Jarvie who asked how the dairy industry was going (of which I was working with family at the time at Narangba). I told him it was looking quite grim with deregulation about to hit and Bruce told me to keep in touch as there might be an employment opportunity coming up. And so it began…

I was born in June 1955, 1 of twins, at Royal Brisbane Hospital and was raised as part of a family of 8 children on the family farm on Buckley Road, Burpengary. My parents worked very hard growing small crops and bananas. My father passed away in 1968 and I left school in grade 9 so I could assist at home and I then got a job to help by way of paying board to my Mum who was raising us all. During this time our mother was thankful for assistance received from the local farmers assistance group who helped families in our situation. Whilst working with my father I realised the importance of a strong work ethic which I have maintained throughout my working life.

In my teen years I became active in the Caboolture Rural Youth Club organising country dances, this is where I met my wife to be Valerie Young, who was playing as a Band member. We married in 1975 and lived in Caboolture. I studied and became an Ambulance Officer and controller at Caboolture Branch of QATB from 1979 to 1991, and the experience I gained from this occupation assisted greatly in coping with the tasks associated with the funeral industry.

After having our family of 3 we returned to live at Young’s Family Farm at Narangba in 1986, a dairy farm which successfully employed the large family of Young’s for approx. 50 years. Val and I lived here, worked on the dairy and successfully raised our children.

In 2001, that employment opportunity arose at Traditional Funerals and a few weeks later I was employed as a groundsman/gardener with the specific task of establishing new gardens in the grounds of the business. After the gardens were established, and growing beautifully, we won many awards from the local Council and were regularly commented on by the local public. The company was continuing to grow and I progressed into a fulltime funeral assistant position.

Helping people has always been something from which I get a great feeling of satisfaction and because of my connection with the Burpengary and Caboolture areas, I often know the families seeking assistance from Traditional Funerals, and I consider this a great honour and privilege to help families during their grieving and mourning process.

For the past 16 years I have learned and carried out every aspect of the funeral industry from coffin trimming, operations coordinator, cremator operator, to mortuary functions, I derive lots of satisfaction from passing on my knowledge and mentoring new staff members and thoroughly enjoy working in a team atmosphere at Traditional Funerals and hope to continue to do so as long as I am able.